RCP8.5 as BAU Study of the Day

For my collection, another misuse of RCPs makes it into scientific literature and then into headlines in major media. More after the jump …

USA Today:  “Bye-bye beaches? Half of the world’s beaches could disappear by 2100 because of severe erosion linked to climate change, a study published Monday suggests… The study’s authors calculate that up to 40% of shoreline retreat could be prevented by reducing the greenhouse gas emissions that are driving climate change…”

CNN: “The researchers did find that humans have some control over what happens to the world’s beaches. If the world’s governments are able to stick to modest cuts to heat-trapping gas pollution, the researchers found that 17% of projected beach losses by 2050 could be prevented, a number that grows to 40% by 2100 if greenhouse gases are limited. “By trying to accomplish the Paris agreement goals, we can reduce 40% of the impacts that we project in our study,” Vousdoukas said.” 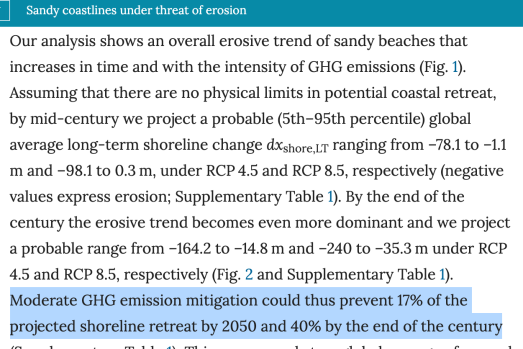