Along with Björn-Ola Linnér I have a new paper accepted in Minerva. To understand the picture above and its significance, you’ll have to read the paper. The misuse of science by US presidents is not a new phenomena. Details:

Pielke, Jr., R. and Björn-Ola Linnér (2019, in press). From Green Revolution to Green Evolution: A Critique of the Political Myth of Averted Famine, Minerva.

Here is the abstract:

This paper critiques the so-called “Green Revolution” as a political myth of averted famine. A “political myth,” among other functions, reflects a narrative structure that characterizes understandings of causality between policy action and outcome. As such, the details of a particular political myth elevate certain policy options (and families of policy options) over others. One important narrative strand of the political myths of the Green Revolution is a story of averted famine: in the 1950s and 1960s, scientists predicted a global crisis to emerge in the 1970s and beyond, created by a rapidly growing global population that would cause global famine as food supplies would not keep up with demand. The narrative posits that an intense period of technological innovation in agricultural productivity led to increasing crop yields which led to more food being produced, and the predicted crisis thus being averted. The fact that the world did not experience a global famine in the 1970s is cited as evidence in support of the narrative. Political myths need not necessarily be supported by evidence, but to the extent that they shape understandings of cause and effect in policymaking, political myths which are not grounded in evidence risk misleading policy makers and the public. We argue a political myth of the Green Revolution focused on averted famine is not well grounded in evidence and thus has potential to mislead to the extent it guides thinking and action related to technological innovation. We recommend an alternative narrative: The Green Evolution, in which sustain improvements in agricultural productivity did not necessarily avert a global famine, but nonetheless profoundly shaped the modern world. More broadly, we argue that one of the key functions of the practice of technology assessment is to critique and to help create the political myths that accompany technologies in society.

Please be in touch if you’d like a pre-publication copy.

I review The Uninhabitable Earth by David Wallace-Wells in The Financial Times this weekend. Here is how it starts:

In 1842 the German writer Heinrich Heine cautioned that “wild, dark times are rumbling toward us, and the prophet who wishes to write a new apocalypse will have to invent new beasts” in order to capture our attention. In his book The Uninhabitable Earth, David Wallace-Wells describes a new apocalypse accompanied not by four horsemen but by 12 “elements of climate chaos”.

The book expands on Wallace-Wells’ widely read New York Magazine article of the same title from the summer of 2017. That article, and the book, briefly catalogue a litany of calamities now and in the future that might be associated with climate change — disease, disasters, war and more. 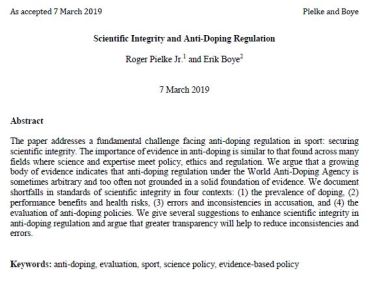 Our paper (co-authored with Prof. Erik Boye), Scientific Integrity and Anti-Doping Regulation, has been accepted for publication in the International Journal of Sport Policy and Politics.

We evaluate recent experience in anti-doping from the standpoint of scientific integrity, and specifically we focus on:

For a pre-publication copy, please email me.

I’m late to post this, but before the Super Bowl I had an op-ed in USA Today that addressed the question above. How it starts:

In the 2018 US midterm elections a record 117 women were elected to Congress. National politics, once exclusively a men’s club, is changing fast. However, in 21st century America one place place still ruled by men for men — sports.