Did the Trump Administration Delay the WHO Emergency Declaration? 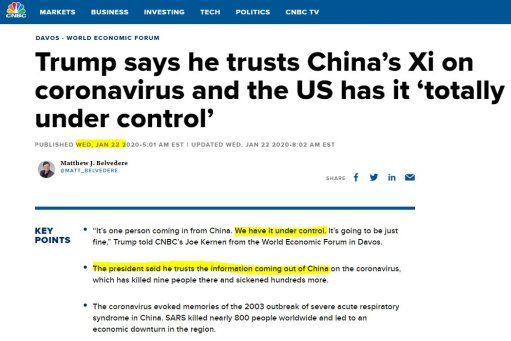 Yesterday in the White House Rose Garden, President Trump announced that the U.S. government would be suspending payments to the World Health Organization. Among the president’s complaints was this: “The delays the WHO experienced in declaring a public health emergency caused valuable time, tremendous amounts of time.”

Let’s look at the facts.

The US government had a member on the WHO International Health Regulations (IHR) Emergency Committee for Pneumonia due to the Novel Coronavirus 2019-nCoV which advised the WHO on declaring a Public Health Emergency of International Concern (PHEIC). That individual is Dr. Martin Cetron, Director of Global Migration and Quarantine at the Centers for Disease Control.

According to the WHO, at the coronavirus advisory committee’s first meeting on January 22, 2020,

“the Committee expressed divergent views on whether this event constitutes a PHEIC or not. At that time, the advice was that the event did not constitute a PHEIC, but the Committee members agreed on the urgency of the situation and suggested that the Committee should continue its meeting on the next day, when it reached the same conclusion.”

This raises an important question: In the WHO advisory committee meeting on January 22, did the US government advocate for the declaration of a Public Health Emergency of International Concern?

CDC should be asked what recommendation to WHO it made on January 22, related to the declaration of a PHEIC. This is an important fact to get on the record for purposes of oversight.

The WHO advisory committee met for a second time on 30 January 2020 and at that time recommended the declaration of a Public Health Emergency of International Concern (PHEIC), which was declared by WHO that same day. The US government did not declare a domestic public health emergency until a day after WHO declared a PHEIC, on January 31 (which, it retroactively dated to January 27).

One possibility is that US political leaders felt that they needed the “political cover” of a WHO emergency declaration to declare a domestic emergency. If so, then there is no evidence of the US calling for a WHO PHEIC at any time prior to the US declaration — it fact, all public statements by US officials during this period, including by the President downplayed the risks posed by the disease.

Ultimately, it is essential to understand that the declaration of a US emergency depended in no way on a WHO declaration, or for that matter, any advice or information whatsoever from WHO. The US has an independent collections of experts in government and government advisory bodies on which to base a decision to declare a domestic emergency. President Trump’s argument appears to outsource this advisory role to a multilateral organization. Ironic, no?

Many US govt (CDC) staffers were embedded @WHO from Day 1 of outbreak. On Jan 10, 2 eminent US officials (CDC, NIH) took part in our 1st STAG-IH on virus. ~10 US CDC meetings with WHO in Beijing in Jan. A CDC official served on emergency committee 22-23, 30 Jan (PHEIC declared.) https://t.co/4NWnCcPDXD