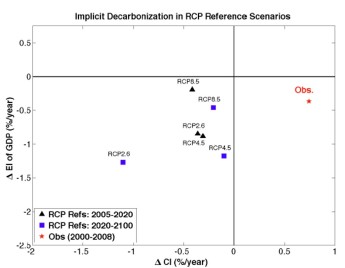 Here is a paper that I did with a then-grad student, Samantha Stevenson, which we never did get published. It was a follow-up to Pielke, Wigley and Green 2008 and found that the assumptions of spontaneous decarbonization embedded into the IPCC FAR were also present in the RCPs of the AR5. If that gobbledygook makes sense, then this is a paper for you.

Projections of future climate change depend upon future anthropogenic greenhouse gas emissions. In preparation for its Fifth Assessment Report, the Intergovernmental Panel on Climate Change implemented a new approach to generating emissions scenarios, called ‘Representative Concentration Pathways’ (RCPs), which replace the scenarios in the ‘Special Report on Emissions Scenarios’ (SRES). The RCPs are designed to provide a range of emissions consistent with a particular radiative imbalance, but projected climate policy actions are heavily influenced by the choice of ‘reference’ or baseline scenario, often derived from the SRES. Here we show that ‘built in’ to the RCP reference cases are some of the same implicit and aggressive assumptions regarding rates of the decarbonization of economic activity found in the SRES [1]. Rates of ‘automatic’ reduction in energy and carbon intensities in the RCPs in the absence of policy are broadly inconsistent with observations from 2000-2008. The ‘stabilization’ pathways used to drive physical climate models are more aggressive still, with reductions in carbon and energy intensities substantially larger than observed. The fact that much of the required improvement in energy and carbon intensities are built into the RCP reference scenarios has profound implications for our ability to evaluate climate stabilization goals.